This week’s post is written by the Rev. Dr. Patrick G. Duggan, Executive Director of the United Church of Christ Church Building & Loan Fund. Since 1995, Rev. Dr. Duggan has also served as senior pastor of the Congregational Church of South Hempstead in South Hempstead, New York.

Recently, my lifelong study of African American history led me to what was perhaps the most comprehensive U.S. government study of religious traditions in American history, Report on statistics of churches in the United States at the eleventh census: 1890. Henry K. Carroll, special agent.[1]  Of the dozen or so times over 100 years that the report was conducted, the 1890 report contains the most extensive data set of all the reports. The Summary of Colored Organizations on pages 48-49 provides a statistical profile of the black church, the most powerful and enduring of all African American institutions.

What does this statistical snapshot reveal about 19th century African American Christians?

One obvious historical irony is that a Federal system that first considered black-skinned Americans as ‘three-fifths human’, one hundred years later recorded that this same “inferior” people controlled over $26 million in assets in their own institutions. Twenty five years after the end of slavery, the American body politic was now fixated on the denial of all civil, economic, political and human rights to Americans of African descent.  Fifteen years earlier, in the Reconstruction period, black persons were elected in record numbers to Congress, the U.S. Senate, and many local offices. Now, in the late 19th century, through murder, intimidation and the rise of white terror groups, legitimate black political power was virtually extinguished.  Jim Crow laws became the order of the day. Lynchings continued on an almost daily basis, while as Douglas Blackmon writes, the ongoing re-enslavement of blacks created “a world in which the seizure and sale of a black man—even a black child—was viewed as neither criminal nor extraordinary… Millions of blacks lived in…..terror of the system’s caprice.” 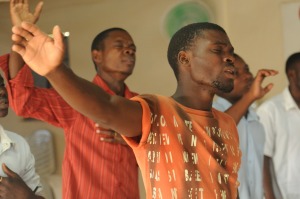 By the power of the Holy Spirit, 19th century African American Christians feared no evil, but used spiritual jujitsu to embrace their agency and walk quietly through the valley of death.  Free blacks and former slaves pooled meager resources to organize their wealth and create a viable, lasting meta-institution, the black church.  They created the secret sauce of the Afro-Christian ethic _the ability to transform the tragic into the fuel of faith_ so that millions of broken spirits were transformed by the Gospel of Jesus Christ.  Add to this human interior renovation the meeting of human needs through food pantries, benevolent societies, literacy training, burial insurance, the capacity to mobilize millions of volunteers, and the thousands of black businesses launched in church meetings. In an impossible situation, these black coopted unrighteous mammon and built a path toward a vision of freedom.

The United States of America today is the wealthiest country on the planet. As wealth has increased and become concentrated into fewer hands, it now regards the rest of the humanity as a threat. Like the 19th century on steroids, white supremacy today is intent on eliminating human and civil rights and denying the humanity of any racial, ethnic, religious, or gender identity that is not white, male, and heterosexual. Although there is ample wealth to end poverty, elected officials are intent on destroying America’s renowned social “safety net”.  Forty three million Americans live in poverty; 14 million of these are children.

What can the progressive church today learn from the church founded largely by former African slaves? Know what you are up against, but be laser-focused on what you are fighting for. Then and now, poverty has many symptoms that demand immediate relief. While triaging the immediate needs of poor and marginalized people, 19th century African American Christians built sustainable institutions with the wealth and capacity to co-opt and disrupt over the long term, rapacious, death-dealing forces driven by greed. There was no formal national African American agenda, nor expressed mission or vision statement. Their organizing principle was to live out authentically the truths that white supremacy espoused but failed drastically to apply. The church built largely by former slaves embraced the Gospel mission of Jesus, and was driven by the unfulfilled vision of America’s founding mothers and fathers.

Progressive church leaders, let us follow the lead of our spiritual forbears. They battled the daily tactics of death and destruction and simultaneously bent the moral arc of history toward justice. So can we.