This week’s post is from Rev. David Schoen, author of Facing Your Church’s Uncertain Future: Helpful Practices for Courageous Conversations & Faithful Decisions. To contact Rev. Schoen, email him at dschoen@ucc.org.

Are church closures increasing? It’s a question that I’m often asked. Through the work of the UCC Center for Analytics, Research and Data (CARD) there is now new data that can answer that question. But before we get to statistics, I’d like to share the experience of one of those closing congregations behind the data.

The church board president, upon the recommendation of the association minister, sent me an email seeking assistance in closing their church and creating a legacy. At one time this church had more than 500 members, but now had only 25 in worship. There was no pastor at the church and the board president was doing this demanding work of closing individually.  No leader, pastor or congregation should have to face the closure process alone. I recommended the church create a closure and legacy group to work on all the tasks involved. The congregation created a legacy committee that studied closure resources and legacy options. The congregation also called an intentional interim minister to serve during this time of transition as they made the difficult but faithful decisions involved in closing their congregation with a goal of passing on their legacy.

As part of this process, the congregation identified hallmarks of their ministry through the years. The congregation had been active in service to their community, conference, wider world and church. The congregation also generously contributed to Our Church’s Wider Mission. Through their legacy planning, they sought to continue their historic mission in the community, church, and world. True to their love of neighbors, the church donated their handsome building to the city as a community center to house service organizations. Their financial legacy was distributed to support the ongoing work of local community organizations as well as the ministry of the United Church of Christ in association, conference and national settings.

The closing of a congregation may be a time of grief, but it is also a time for thanksgiving. A time to faithfully culminate the mission of a congregation and give thanks for the many ways that the Spirit of God has moved through the congregation’s life and ministry. In an email after the Service of Closure and Thanksgiving, the church president wrote that the experience was a ‘difficult, but ultimately right and rewarding process’.

Are there more congregations like this one closing today than in the past? The CARD staff recently located notes[i] on church closures from 1995 through 1999 that helps us put perspective on what is happening today. 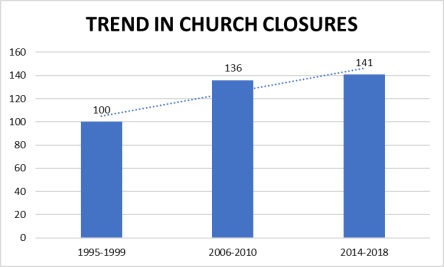 In the words of the church board president, the challenge of facing the increase in church closures may be ‘difficult, but ultimately right and rewarding’.

[i] Thanks to the longtime record-keeping of Reverend Richard Taylor.